Better to not return to some schools after the lockdown: what would the Swiss say? 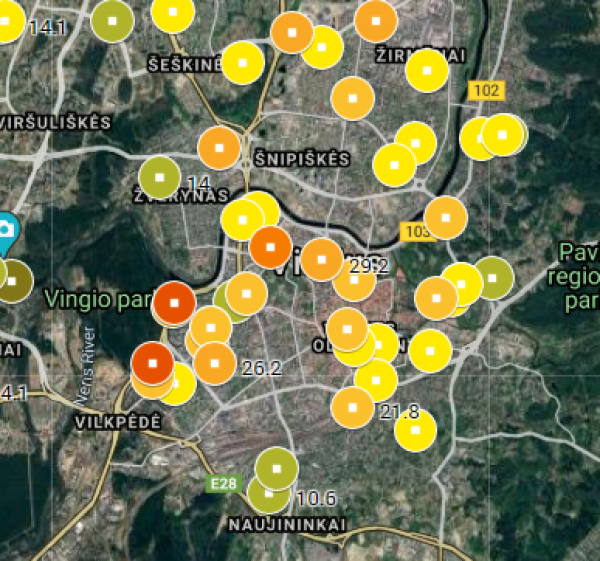 A nitrogen dioxide (NO2) pollution study performed by the Alliance of Lithuanian Consumer Organisations (ALCO) before the lockdown has confirmed concerns that the most polluted locations are close to the capital’s major transportation arteries.

The combined nitrogen dioxide concentration level in the tested locations in Vilnius does not exceed the threshold norm established in the European Union directives, which is 40 micrograms per cubic meter (µg/m3) of ambient air.

However, Vilnius “grey” areas, where the maximum safe threshold is approached, were uncovered during the testing. One of them is the Jonas Basanavičius Gymnasium at the cul-de-sac of S. Konarskis street, next to the particularly busy Geležinis Vilkas motorway and Vingis Park. This location saw nitrogen dioxide pollution levels of 35.1 micrograms per cubic meter. Such levels would already be a cause for concern in Switzerland because the country has established a lower threshold level than the European Union – 30 micrograms instead of 40.

The anti-record spotted by the Alliance is the M. K. Čiurlionis and Geležinis Vilkas street intersection. A sensor installed on the viaduct, which Vilnius residents and their families take to reach the highly popular Vingis Park, displayed NO2 concentrations of 35.5 micrograms per cubic meter.

“Scientists say that there is no level of nitrogen dioxide pollution that is safe for human health. Yes, during the lockdown, NO2 pollution near Geležinis Vilkas and in other Vilnius locations decreased. Nevertheless, do we want to return to what was negative while rushing to return to our “pre-lockdown” lifestyles? Do we want the city pollution levels to go back to pre-quarantine heights?” asks Mr. Kęstutis Kupšys, the Vice President of the Alliance who led the study.

According to K. Kupšys, nitrogen dioxide is a gas released in the process of burning fuel. The greatest polluter is transport vehicles, particularly diesel-powered cars, as well as industry and energy production. This gas is especially harmful to human health. In the long term, it leads to respiratory and lung diseases. It has been noted that almost 0.5 million people die prematurely due to air pollution across Europe every year.

“The NO2 gas damages lung development. Healthcare experts emphasise that it poses a particularly significant threat to children and young people because their lungs are still forming. Thus, a school located in one of the most polluted places in Vilnius seems like a cruel joke,” K. Kupšys says.

The nitrogen dioxide air concentration testing was performed in February of this year. Sixty-one diffusion tubes containing reagents to detect nitrogen dioxide were placed in various locations around Vilnius. The LVOA obtained them from an accredited laboratory in Zurich, Switzerland. The sensors used in Vilnius were returned to the lab, and reliable testing results were then obtained from the Swiss scientists.

According to K. Kupšys, the tests aimed at obtaining an image of what the overall nitrogen dioxide concentration is at human height level (1.5 meters off the ground) in the city. The results can be found in the Vilnius NO2 Pollution Map compiled by the Alliance (https://bit.ly/Vilnius_NO2).

While testing, there was a focus on children’s education institutions – a significant number of sensors were placed near schools and kindergartens. Close to more active streets, sensors were planted in several locations – near “Kiss and Ride” zones, where parents drop off their children to school from typically polluting, large vehicles, close to school entrances. The testing confirmed the hypothesis that the concentration of nitrogen oxides (including nitrogen dioxide) decreases a little further away from the street.

Another “grey” spot on the Vilnius NO2 map is the V. Kudirkos street – Gediminas Avenue intersection, close to the Lithuanian Academy of Music and Theatre. This location measured nitrogen dioxide concentrations of 34.3 micrograms per cubic meter. The map also shows that it is unsafe to breathe in most of the Old Town, Užupis and Naujamiestis districts. Prominent shopping centres – “Mylia” (Kedrai street), “Panorama” (T. Narbuto street), “Ozas”, “Akropolis” (both on Ozas street) – also cannot be viewed as safe havens of fresh air.

“The major cities in Europe such as Paris, Brussels and Milan have been making use of the lockdown, reducing transport flows in their historic city centres and handing streets over to pedestrians and bicycle riders. We call upon the city space planners of Vilnius to do the same. Declaring a part of the city as a non-polluting transport zone would be a massive boost toward choosing cleaner modes of transportation. This would benefit us all,” K. Kupšys is convinced.

This ALCO study is part of a larger study performed across several Eastern European countries. The European Consumer Organisation BEUC helped coordinate the effort of national consumer organisations. In June, ALCO will release results for NO2 tests in Kaunas and Klaipėda. In total, 154 NO2 sensors were placed across Lithuania in February of 2020 thanks to the efforts of the Alliance’s volunteer team, with the last sensors being retrieved on March 8, right before the COVID-19 lockdown was announced, thus its restrictions had no impact on the testing results.

About the Alliance of Lithuanian Consumer Organisations

About nitrogen dioxide: Nitrogen dioxide is a reddish-brown gas with a pungent, acrid odour. Nitrogen composites are the product of all combustion processes; however, most of them reach the atmosphere alongside transport exhaust and when burning fuel in heating infrastructure. Usually, it enters the environment in the form of nitrogen oxide (NO), however, under normal atmospheric conditions, NO continues to oxidise to NO2, which is harmful to health. Increased nitrogen dioxide concentrations in the air can irritate the lungs, reduce the body’s resistance to respiratory tract infectious diseases. Furthermore, nitrogen oxides are among the most important components in causing acid rain, which harms plant life. (Source – Environmental Protection Agency, http://oras.gamta.lt/)

Study on the impact of diesel engines on the health of European citizens and expenses in the healthcare system: https://epha.org/ce-delft-health-impacts-costs-diesel-emissions-eu/ (European Public Health Alliance)